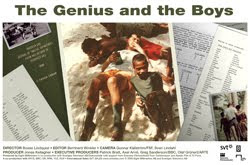 A Nobel Prize winner and a pedophile.

D Carleton Gajdusek won the Nobel Prize for the discovery of Prions – the particles that would emerge as the cause of Mad Cow disease – while working with a cannibal tribe on New Guinea. He was a star of the scientific world. Over his years working amongst the tribes of the South Seas, he adopted 57 kids, bringing them to a new life in Washington DC. His adoptions were hailed as wonderful fatherly beneficence. But, at the height of his career, rumours began to spread he was a paedophile.

Eight Millimetres is a non-fiction company based in Göteborg, Sweden